It’s that time of year again. Bottle up that prize winner and get your entries in the queue. 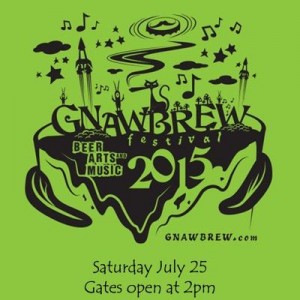 GnawBrew is a single day Beer, Art and Music Festival hidden in the beautiful hills of Brown County. If you’ve joined us before you know that where we differ from the larger events is that we only offer a very limited number of tickets to our event. What this does is create the perfect atmosphere for personal interaction between the artists, brewers, musicians and the patrons. It also ensures that everyone gets their fill of the samples offered and doesn’t have to wait in line all day to achieve that. Another thing that we pride ourselves on here is that GnawBrew is as much an Art and Music festival as it is a Beer Fest leading to us being able to provide quite the Rockstar treatment for our Brewers and their staff in addition to our Musicians and Fine Artists. And last but definitely not least here at Camp GnawBrew after they’ve enjoyed their day our patrons are encouraged to retire to tents or cabins to sleep off all of the wonderful libations sampled throughout the day. And a primitive campsite is included free as a courtasy from our host venue Explore Brown County with the purchase of any level of GnawBrew2015 ticket. 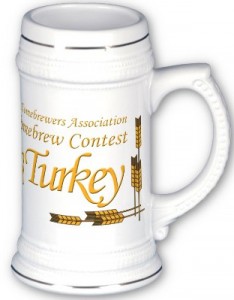 Entries due at the Nov. 18 Meeting
Winners announced at the December Meeting

This year, for the first time, you will have two styles that you can enter. The beer styles for the 9th annual OVHA Big Turkey Competition are Porter BJCP Category 12 and IPA BJCP Category 14

Judging will not occur at the meeting. The OVHA Big Turkey brewing contest is open to all paid members of the OVHA.

Carson’s Brewery is sponsoring 2015 Big Turkey BOS again this year! The grand prize will be the opportunity to be “Pro-Brewer for a Day”. You will help brew your winning recipe on a commercial system! We will also have a club-wide tapping party when the beer is ready.

One winner, the Best of Show, will get their name on the Big Turkey trophy, brew their recipe at Carson’s Brewery, receive one year’s free OVHA membership, get a Big Turkey ceramic stein. Other prizes to be announced.

Yearly homebrew contest and party where the winner gets to brew a commercial batch at Upland Brewing Company. Entries due the 22nd.

Entries due at the Nov. 20 Meeting. Please register and add your entries online.